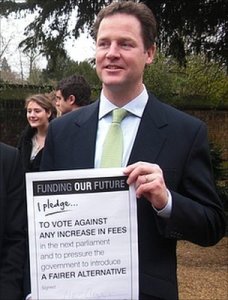 As the Liberal Democrat conference unfolds, it has given me cause for reflection of my own experience over the last few weeks, speaking to voters in the towns and villages that make up the Chippenham constituency, particularly Bradford, Chippenham, Corsham and Melksham, I have been struck by how many voters feel personally betrayed by Lib Deb MP, Duncan Hames.

I spoke to one woman from Corsham, a life long Labour supporter, who was persuaded to vote Lib Dem in 2010 after meeting Duncan Hames in the street, and him looking her in the eye and assuring her that the only way to stop a Conservative government was to vote for him. Since then Mr Hames has been staunch supporter of the Conservative led government.

Having specifically pledged to “vote against any increase in [student tuition] fees in the next parliament”, according to They work for you, Mr Hames:

In the lead up to the 2010 election, the Lib Dems warned of “a Tory VAT bombshell”, warning that “You’d pay £389 more a year in VAT under the Conservatives”

According to They work for you, Mr Hames:

The Lib Dems also betrayed voters over the Mansion Tax. Party leader, Nick Clegg, made a speech to the Resolution Foundation on 26 Jan 2012 saying:

The Mansion Tax is right, it makes sense and the Liberal Democrats will continue to make the case for it. We’re going to stick to our guns.”

MPs have rejected Labour calls for a “mansion tax” on properties worth more than £2m to be introduced before the next general election. Conservative and Lib Dem MPs joined forces to defeat the move by 63 votes after a Commons debate.”

Despite representing themselves as a party of individual liberty, the Lib Dems are Backing the Tories’ Gagging Bill, which threatens to stop charities and campaigning groups speaking out on the issues that matter to them.

Even the non-partisan Electoral Commission warns that this bill is a significant threat to campaigning organisations.

“the Bill creates significant regulatory uncertainty for large and small organisations that campaign on, or even discuss, public policy issues in the year before the next general election, and imposes significant new burdens on such organisations”

Duncan Hames MP supports a bill that could potentially make it a criminal offence for his constituents to campaign in the year before an election on matters such as whether Corsham has a railway station, whether uniform postal prices are maintained by Royal Mail in rural areas, or over service cuts by Wiltshire council. It would limit public debate over issues like the badger cull; or hunting with dogs, gagging both supporters and opponents of the Avon Vale hunt.

What exactly does Mr Hames believe in?